Copyright Can be a Minefield

Copyright Can be a Minefield 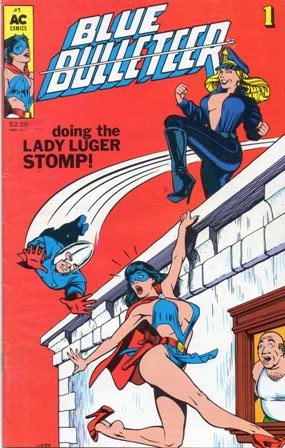 US copyright laws seem to confuse even the publishers if this little oddity is anything to go by. AC Comics published just one issue of The Blue Bulleteer in 1989, but she was originally intended to be 1940s character the Phantom Lady, originally published by Quality Comics-and she's still wearing Phantom Lady's costume! AC apparently believed at the time that the Phantom Lady was out of copyright and in the public domain, but had to change the character's name to 'Nightveil' when they resurrected her in their Fem Force title after DC pointed out that they had bought the character decades before. AC renamed her The Blue Bulleteer in her own title, but to confuse matters still further, also brought in a second Blue Bulleteer who competed with her for the name-and this one was clearly actually former Fawcett character Bulletman (also owned by DC by this point) recoloured on the cover! They even ran a relettered reprint of a Bulletman strip in the back of the book...