Christmas stories have been a tradition in comics pretty much forever. Any favourites? British, American or otherwise, which stories stand out as the best? For me, the top one is still probably 'Should Auld Acquaintance be Forgot' from DC's 'Christmas With the Super Heroes' #2 (1989), in which a depressed Deadman is reminded of the meaning of Christmas by a mysterious blonde who we (but not he) eventually realize is the ghost of the long dead and supposedly forgotten Supergirl. But I also have a soft spot for the bit of lunacy reproduced below, in which the Toyman tries to sabotage Christmas... 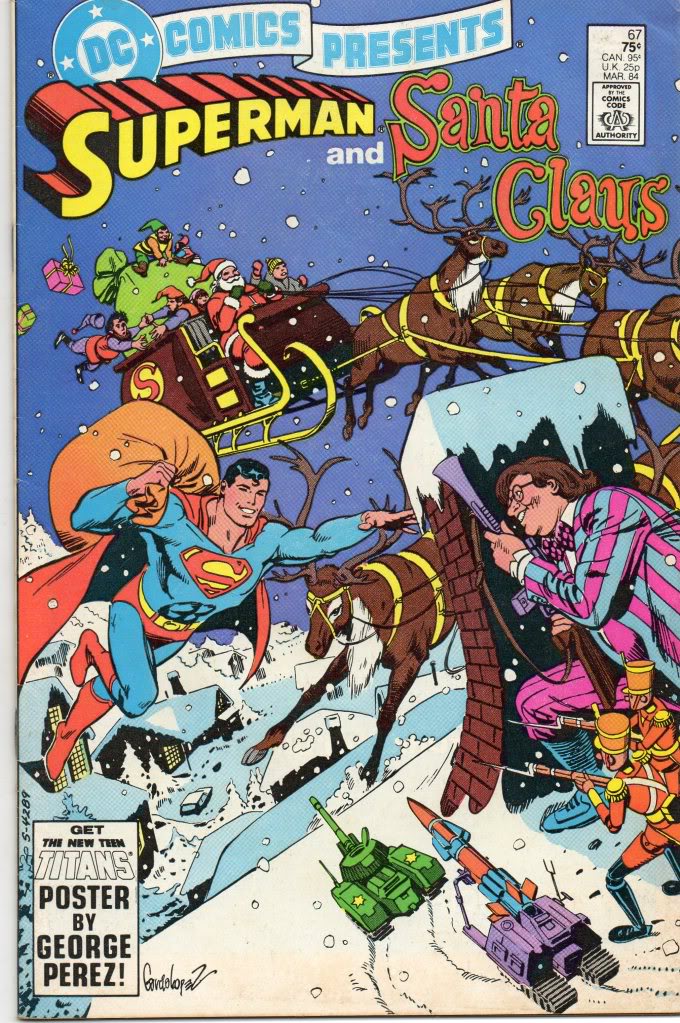 My favourite Christmas story is the one where Hatch gets snow balled - at least it's original...

Share it with the boys and girls, Uncle Glenn.

Thanks for posting for me, Tony - the most original story in the history of comics!!

I liked it. Full of pathos.

Good to see you've not lost any of your jealously for the New Year and new decade, Mr Ingram!!

...oh, and a Happy New Year to everyone...let's hope you all get the
Doctor Who story you deserve!!

And a Happy New Year from me, too!

The first half of The Red Man's Ghost from The Boys Friend in 1913 is good. I say "first half" because i somehow missed the big "two part story" blurb on the cover and will probably never track down the second part!

Another is one i read recently, but i can't remember where. Possibly in The Captain from 1914. Anyway a clerk in the 18th century leaves his mean, miserly boss/guardian and aims to go to sea. He actually says stuff like "These are stirring days and i would love to serve my lord Nelson" and "The press gang shall have no need of me! I give myself willingly". It reads like a very earnest school panto! Anyway he discovers a gang of highwaymen are plotting to hold up the guests at a party, and rescues a small but brave one-armed man from the gang. And wouldn'tyaknowit, but it turns out to be Nelson himself, who gives our hero a comission.