Have been reading some of the Retroactive comics. A new strip set in "old" continuity backed with a classic reprint.
Not sure whether the publication of these is a co-incidence or a deliberate attempt to throw a bone to aging fanboys before they piss them all off with DCNu.

Have read the 70s Justice League, Superman and Batman ones so far,
Batman is easily the best of the three. A nice couple of standalone stories. Simpler stories for a simpler time.

The Superman one is not bad. Superman's continuity has been changed a lot more than Batman's so it's nice to see the "old " Fortress of Solitude, his close friendship with Supergirl (in her funky seventies costume

) and his job at Galaxy Broadcasting. The reprint is the story of how the Earth 2 Superman and Lois got married, so maybe not a "typical" seventies tale.

The JLA one is a touch disappointing. Both the new strip and reprint show how self indulgent the whole "multiple Earths" thing had become. Set on Earth Prime (ie the real Earth where superheroes exist only as comic book characters) the writers, artists and editors write themselves into the story.
The reprint is part one of a longer story and ends on a cliffhanger, which makes it kind of pointless. It's not like there weren't plenty of standalone stories back in the 70s they could have picked instead.

Haven't picked up the other 70s issues. The Wonder Woman and Green Lantern ones have got terrible reviews. And the Flash one apparently contains a reprint of part two of a story from DC Comics Presents. Another odd choice.

Overall, the Retroactive idea seems better in conception than execution at the moment. The choice of reprints could be a lot better and even the new strips leave you with a feeling that perhaps things weren't so much better in the old days after all.
Nevertheless, I've still ordered a few Retroactive 80s issues to follow. 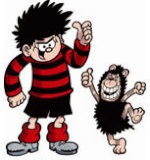 I haven't picked these up yet (I only get into town about once a month these days, so they'll be waiting in my file at Central City Comics) but I've been looking forward to them. It does seem somewhat perverse though, to resurrect the old continuity a month before throwing it all away....

And I still think they should have had either an All-Star Comics issue by Levitz in with the 70's issues or an All-Star Squadron by Roy Thomas in with the eighties ones. I'm hoping we at least get a Huntress backup feature in Wonder Woman...

tony ingram wrote:
And I still think they should have had either an All-Star Comics issue by Levitz in with the 70's issues or an All-Star Squadron by Roy Thomas in with the eighties ones. I'm hoping we at least get a Huntress backup feature in Wonder Woman...

I'm hoping these issues will be a success so that less obvious characters can get the same treatment.
Teen Titans would be a good one for the 80s but I'd love some classic 70s Superman Family stuff too.
Would be great to have John Byrne do a new Superman story set during his 80s run too.

A Wolfman/Perez Teen Titans issue would be great, I agree. Surprised that wasn't among the first wave, in fact!

tony ingram wrote:A Wolfman/Perez Teen Titans issue would be great, I agree. Surprised that wasn't among the first wave, in fact!

Looks like they have a hardback graphic novel set during their classic run coming out instead.

That'll be on my 'must buy' list somewhere after the Infinity, Inc. reprint hardcover.

The reprint is the first part of Year Two with art by Alan Davis, always a favourite artist of mine.
However it also shows how they haven't quite thought these Retroactive comics through enough as the main story picks up characters and plotlines from Year Two and therefore requires you to already be familiar with that story to get the most out of it.

Someone always screws up like this with these reprint editions. It was exactly the same with Egmont's 'Best of Battle' Special, which gave you random chunks of multi-part serials...

The reprint is from the first issue to feature the WW logo costume in place of the original eagle one.

This is another case where it pays to read the reprint first as the new strip is a sequel to it !

The new strip captures the style of early 80s (pre Crisis) Wonder Woman very well with the invisible plane, Steve Trevor and Etta Candy (the reprint hints at a convoluted explanation of how the latter two are in the "modern" day rather than WW2.)

There are seven artists listed on the new strip which gives the distinct impression of the whole thing being put together in a tearing hurry. Unfortunately it means there's a jarring clash of styles as it starts out with some very nice artwork but ends up looking fugly.

My copy arrived with a preview issue of "the new 52".

Why does there need to be a 'convoluted explanation'? The Earth-one Steve and Etta were always contemporary characters anyway!

The "All-New" in the price box is a bit of a cheek given that the books are 50% reprint ! Still, it's nice to see the classic bullet logo being used again.

This time I learned my lesson and read the reprints first !

The reprint is a nice self contained story. Art is by Curt Swan. For me his is the definitive Superman although I loved some of the later stuff too, particularly John Byrne. Still, whenever I think of Superman it's always Swan's version which comes to mind.

Spoiler:
Kal-El makes a call to his cousin.)

The reprint is a transitional issue where it seems the original "Earth's Greatest Heroes" version of the Justice League is being retired in favour of a team comprised of second stringers that most people won't have heard of. Not sure what the thinking was behind this but at a guess I'm thinking that with the continuity reboot of Crisis it became too complicated to have all of DCs leading characters in the one book and much less of a headache to use a bunch of B list characters who didn't already have their own title. It seems that X-Men is an influence as well with an attempt to have more human interest and socially relevant storylines than the old league.
I guess this didn't really work as I think the title was canceled shortly thereafter.

The main strip dovetails neatly with the reprint and addresses head on the issues of replacing an iconic group of heroes with a bunch of largely unknown ones. As a result it fulfills the brief of hitting the necessary nostalgia buttons and for me was the better of the two books and well worth a read.

tony ingram wrote:Why does there need to be a 'convoluted explanation'? The Earth-one Steve and Etta were always contemporary characters anyway!

No idea but the comic tells us that Wonder Woman "cannot remember that she used to know Steve Trevor or that he comes from a parallel earth."

Ah, I see! No, you're a bit confused there (which is hardly surprising as it is a very confusing subject). That scenario has nothing to do with Earth-Two or the wartime Steve and Diana; it's a reference to the hellishly confusing 1960's/70's situation when the Earth-One Steve Trevor was killed off by Dr Cyber, then later replaced by Hippolyta with a version from an unspecified alternate world who subsequently appeared to die again, with Hippolyta finally removing all Diana's memories of him to 'spare her pain'. Got all that? No? Well don't even get me started on Steve Howard...

The so-called 'Justice League Detroit', incidentally, initially formed in the 1984 JLA Annual (when Aquaman disbanded the original League) and finally disbanded with JLA's cancellation in early 1987 following the murders of Vibe and Steel at the hands of Professor Ivo. They lasted a little over two years in all.

Nice to have Grant/Breyfogle back and the Ventriloquist who was the most memorable addition to Batman's rogues gallery during Grant's run. Otherwise this issue is nothing special.

Worth buying just for one line in the reprint strip which is pure 2000AD :

I used to love the Ventriloquist. A shame they killed him off...
I was less impressed with certain other additions to the rogues gallery from that time, like the KGBeast and the Tallyman.

The 90s wasn't a great era for Superman. The reprint and new strip both date from the post Death of Superman / clone Lex era which was about the time I stopped reading the comic.
Neither is particularly good to be honest. Examples of "bog standard" modern era Superman.
That pony tail on Clark is horrible. Maybe the writer agreed and that's why Superman goes bald in this story !

The reprint appears to be the last of The Giffen / Maguire / DeMatteis run.
This is a title I used to enjoy reading a lot when it was reprinted in London Editions Superman Monthly. I remember it being a very funny title which makes it rather odd that they've chosen such a downbeat issue for the reprint. (Also it's issue #60 and not #6 as the copyright states.)
Thankfully the new strip is great fun and has all the banter and humour that characterised the original run.

So that's it for Retroactive.
I think I might pick up Justice League #1 next week just to see what all the fuss is about.

Justice League America is one that I've been looking forward to. I miss the old gang, especially Ted Kord...