Stan Lee and the other architects of the early Marvel Universe created dozens, or more likely hundreds of bad guys over a few short years. Some, like Dr Doom, Magneto, Loki and the Green Goblin, became major players. Others, like Electro or the Leader, have stayed around as constant but prominent second stringers. But what about those others who for one reason or another were used more sparingly over the years or have just faded into obscurity? Who were the guys who coulda been contenders if given a chance...but weren't? And why did they not fulfil their potential?

My vote for all-time most wasted Marvel villain, incidentally, goes to my favourite X-Men foe, Gunther Bain; the seemingly unkillable Unus the Untouchable!

Unus is way underutilised. The Marvel Chronology Project lists him as having about a third as many appearances as his less interesting buddy, the Blob.
According to Wikipedia, Unus legally changed his name on coming to the USA from Italy, from Angelo Unuscione to Gunther Bain (a fine American name). Do you know whose idea that was or why they thought it was necessary?

I quite agree. Unus is a potentially great character but he only seems to get trotted out about once a decade, and he's been killed off at least twice so far! Ironically, I think the best Unus story was not actually an X-Men story but an issue of Power-Man & Iron Fist in which he was doing nothing more ambitious than robbing shops armed with a baseball bat.

The name change occured between the first and second volumes of The Official Handbook of the Marvel Universe, IIRC. Unus seems to have been one of a number of characters who were "ethnic-ed up" in order to give the MU the illusion of more diversity since they'd just realized not all their readers were Americans. The Rhino was another. And this was also when Pyro became Australian rather than British and the Black Widow and Colossus's real names became the supposedly more authentic sounding Natalia Romanova and Ptior Rasputin instead of Natasha Romanoff and Peter Nikolaievitch Rasputin. It was all rather random.

I should really have added the Ani-Men to this list...

But they're a group, and the rest of the list is single villains. 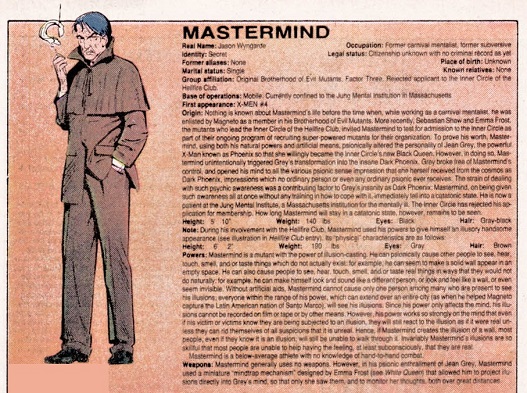 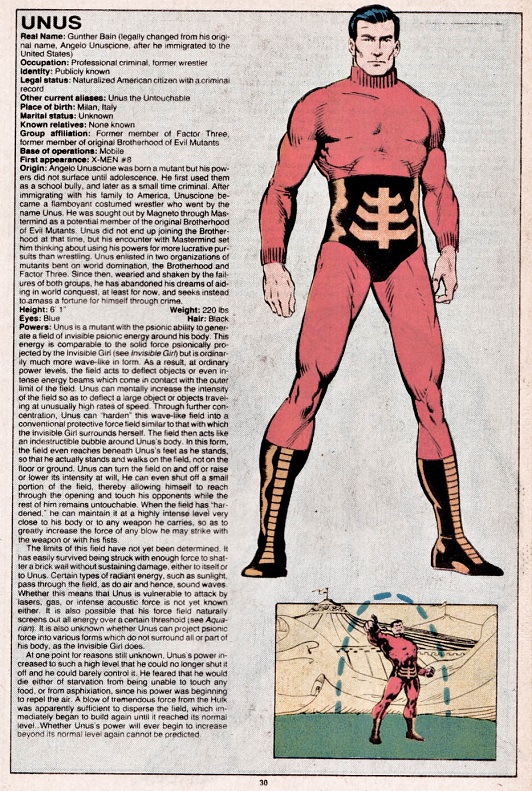 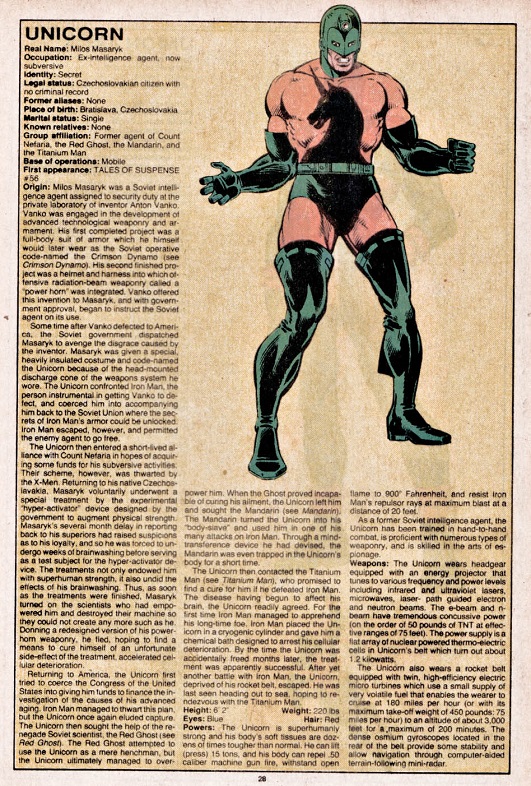 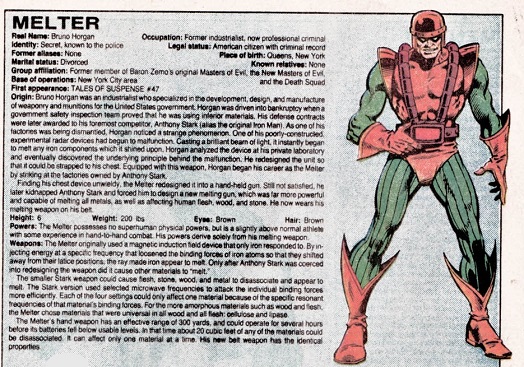 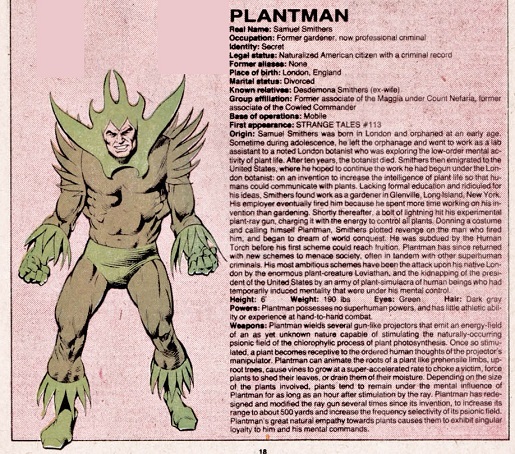 I had to dig a little deeper for the others: 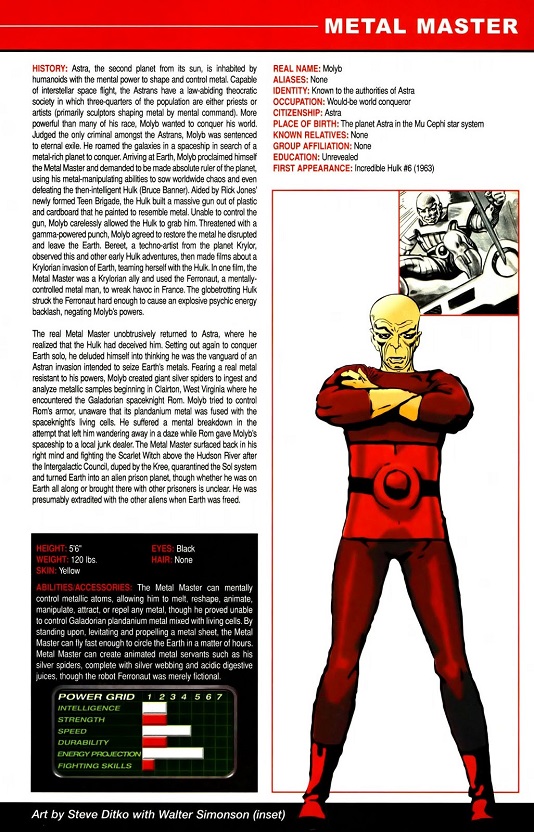 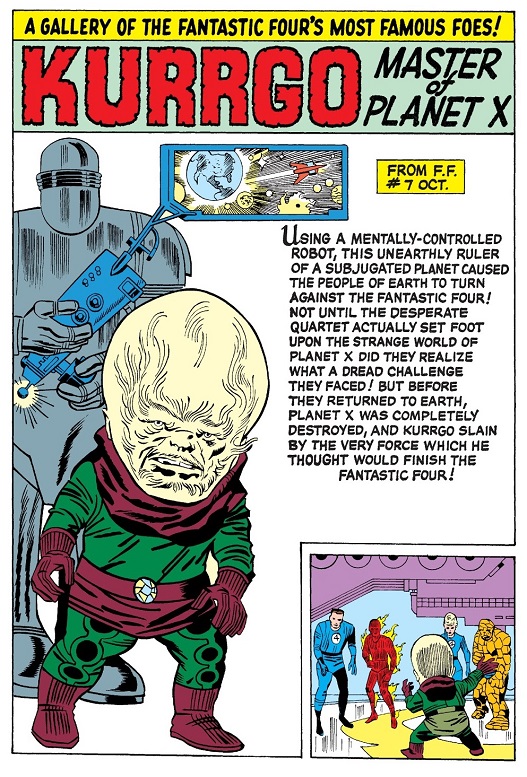 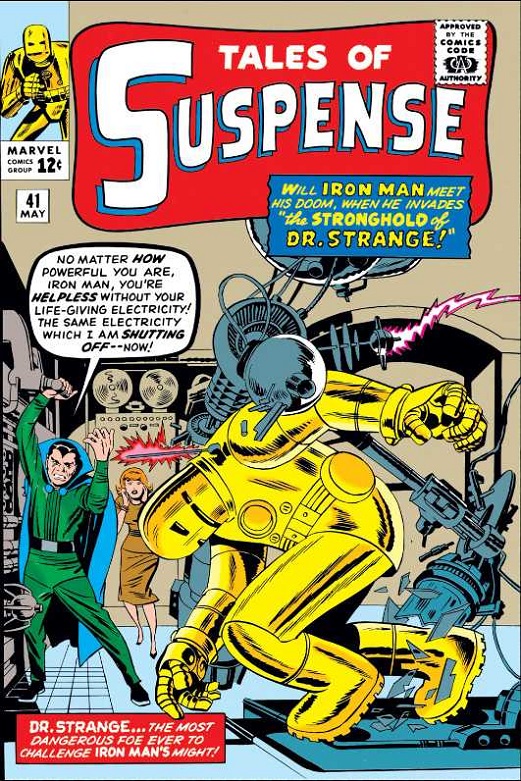 Hey, I was actually telling Lucy about Unus just a couple of days ago! I do wish someone would use him again.

By the way, I know he has had a few outfits, but I'm not sure which looks dumber: that one on Plant Man or this one for Chlorophyll Kid: 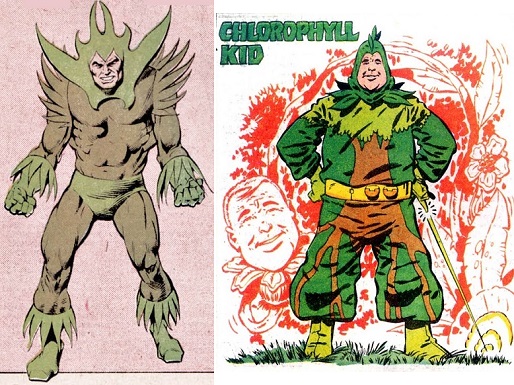 MajorHoy wrote:By the way, I know he has had a few outfits, but I'm not sure which looks dumber: that one on Plant Man or this one for Chlorophyll Kid:

Unus for me, with Unicorn at a close second. And I also don't think they use Diablo enough. 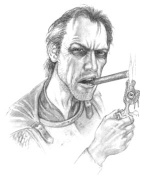 Sam_Vimes wrote:And I also don't think they use Diablo enough.

A sentence I don't think anyone has ever said before.

I can do you one better: I miss Wundarr.

Oh, I miss Wundarr! A lot of untapped potential, there...

Is this the character who later became Aquarian? If so, that could be fun, either version.

Is he technically a Bronze Age creation (since he first appeared in a Man-Thing story in 1973)?

Actually, I might well go along with that. If it weren't for the Metal Master.