apparently, a lot of the popbot books are out of print...and pretty pricey. however, i found a copy of the complete popbot for cover price, so i have that on the way. ('cause of it being out of print, i bumped it ahead of grandville.) i'll let you know what i think once i've gotten into it.

as for metabarons, i am over halfway through the second volume and, so far, i've enjoyed this one better than the first.

I didn't ac tually know that Popbot had been collected in complete form! I'll have to look out for that, I only have the single issues and I'm still missing one...

going back to jodorowsky and moebius, i preordered their madwoman of the sacred heart trade. that book sounded wonderful.

tony ingram wrote: I didn't ac tually know that Popbot had been collected in complete form! I'll have to look out for that, I only have the single issues and I'm still missing one...

just received my copy in the mail today. my copy collects popbot 1 thru 6. i think there are 8? that's what i seem to recall when searching for it.

i started reading popbot today and, yeah, i can see what you mean about it being hard to describe. and i mean that in a good way. it's certainly interesting and entertaining.

almost finished with the metabarons. and i'm slightly disappointed because madwoman of the sacred heart, at least on amazon, has been delayed. i asked humanoids about it on facebook, and they told me they would look into why amazon had it as delayed. the guy who answered me said that the book had been in stores for a couple weeks.

The ways of amazon are impossible to fathom. They'll often show solicits for stuff that isn't due to even get a release date for months, if ever, but then seem incapable of stocking material available elsewhere.

i ended up cancelling the amazon order and buying from midtown comics. i placed the order last night and the sucker shipped today. i'll have my madwoman sometime next week!

I've actually started buying new comics from ebay shops; they're often a lot cheaper than Amazon, and some of them seem to deliver faster, too.

i got my copy of madwoman today! i'm flipping through it and it looks beautiful. i'll be starting this tonight!

i just finished madwoman this morning. that was a lovely tale, and the art was, of course, outstanding.

When was his art not outstanding? 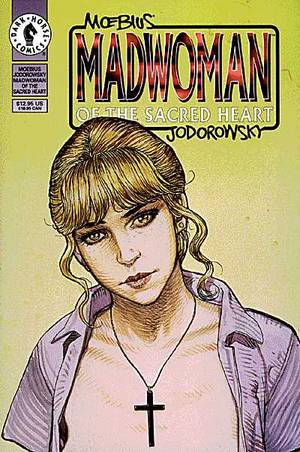 so very true. and that cover is gorgeous. too bad it wasn't included in the collection!

freedumbdclxvi wrote:so very true. and that cover is gorgeous. too bad it wasn't included in the collection!

It's actually part of a larger image, but I suspect Photobucket's terms and conditions wouldn't allow me to upload that. It ends at her waist...

edit: i just found the full image. yes, that's quite a lovely picture.

i just picked up a couple copies of blueberry featuring moebius' art from ebay. looking forward to getting them!

and i just got a copy of airtight garage there. it's been so long since i visited ebay. and now i remember why -- 'cause once i start finding good deals on books, it's hard to stop.

freedumbdclxvi wrote:i just picked up a couple copies of blueberry featuring moebius' art from ebay. looking forward to getting them!

I've read comparatively little Blueberry but liked what I have read. How many are there?

from what i have seen, at least five.

Whoah! According to Wikipedia, there are actually twenty, though only fifteen have been translated into English.

I've been reading a collected edition of Barbarella, published in 1966. Great stuff, incredibly imaginative and I love that classic artwork.

wow. looks like i have quite a few more to get then...

Discussion in this section seems to have ceased. So I hope it's o.k. to add something at this late date. As you can see from my introduction entry, many Euro comics are favourites of mine. As has been mentioned, there is a huge industry in France around comics, although nowadays and for decades, hardback graphic novels have been by far the main part of that, and there is a lot of seriously good stuff available.
But there is a history of comics in France, but also, Italy, Spain, Netherlands and elsewhere going way back and in formats quite different from the standard French GN. And it's not only Tintin, Asterix, Moebius, they're just the well known ones. Historical heroes; costumed crime fighters; cowboys; detectives; adventure stories and lots of humour titles abounded. My main interest is in masked mystery men and the like and while France had reprints and unofficial adaptations of American heroes - Superman, Blue Beetle etc. there were original characters such as Wonderman; Fulguros; Fantax; Masque Blanc; Hero Man; Satanax; Zar'o and so on, in varying formats such as landscape; portrait; pocket library/digest comics. And some of those had different dimensions.
Spain had a simply staggering amount of comics published pre 1960, a big majority of them in landscape format. The most well known arguably being Capitan Trueno and El Guerrero del Antifaz of the historical heroes and Roberto Alcazar y Pedrin, of the detective/thriller type. But, of course, there are piles of masked men - cowboys; historical characters;a couple of genuine superheroes. That leaves out the romance comics, younger female comics, humour titles, war titles. So many.
Italy has a serious back story in comics. Again, superheroes; villains; crime; porno; humour; detective/thriller; historical costumed, sometimes masked, adventurers. Some of that last list gets us into the neri/gialli pocket library comics. Most famous being Diabolik. Other titles included, Zakimort; Demoniak; Sadik; Mister -x; Spettrus; Vampir; Kriminal - my personal favourite. The list goes on.
Wonderful stuff out there far all tastes so don't just visit the big librairie chains when in France, look out for the wee back issue shops or booksellers with old comics. You'll also find reprints of British characters like Janus Stark, King Cobra, Captain hornet and more.

I knew King Cobra had been reprinted elsewhere, but not Janus Stark. Are we talking reprints of individual strips, or actual foreign editions of specific DCT titles?

Janus Stark is a good name.

There was a really long run of Janus Stark in French. Don't have the figures and I'd need to do a wee bit of excavating to find the issues I have. If it's of interest, Steel Claw and The Spider were also reprinted in France, and Spain, for that matter. Main d'Acier and Blackman among other translations of their names. Actually, come to think of it, The Spider was also reprinted in The Netherlands as De Spinne, I think.
Robot Archie is another character who was quite heavily reprinted and I have a Dutch edition on my shelves.

paw broon wrote:There was a really long run of Janus Stark in French.  Don't have the figures and I'd need to do a wee bit of excavating to find the issues I have.  If it's of interest, Steel Claw and The Spider were also reprinted in France, and Spain, for that matter.  Main d'Acier and Blackman among other translations of their names.  Actually, come to think of it, The Spider was also reprinted in The Netherlands as De Spinne, I think.
Robot Archie is another character who was quite heavily reprinted and I have a Dutch edition on my shelves.

That is actually all new information to me, and for some reason makes me absurdly pleased. I've always rather resented the fact that none  of our classic characters ever really cracked America, but at least they cracked Europe! Though I guess that just reinforces the notion that despite the language differences, culturally the UK has rather more in common with its close neighbours than with its former colonies

Just to assuage your resentment about British comics not cracking America - a resentment I share - you need to know that other British comics and characters appeared in European countries.
Leopard From Lime Street appeared for quite a few years in French digest comics, Antares for instance, where he was known as L'Homme Leopard. Dan Dare, the 2000AD version was reprinted in Sunny Sun, who is an alien hero on Earth.
The King Cobra title also featured reprints of Red Star Robinson; Nick Jolly; Scarlet Hawk; Supercats.
I think Raven on the Wing was also reprinted in En Piste.
Buck Jones from Cowboy Picture Library was reprinted in his own title in France but with a slight name change to Buck John. Kit Carson kept his name.
Serials such as The Beetles of Doom were also reprinted.
The Janus Stark comic also featured reprints of Adam Eterno and Masque de Cuir - I forget the Eagle character's English name, sorry. Also Sexton Blake.
Starblazer stories, in no particular order as far as I can see, were reprinted in some digests.
That's just France. I'd need a bit of time to do Spain, Netherlands etc. Because my memory just can't hold all that stuff.

What about the original Dan Dare? Or maybe he was just a bit too English...

Yes, he was basically Biggles in space.

Dan Dare - the original Eagle one - was and is one of my all time favourite characters and, as the song says, "the original is still the greatest". Beautifully drawn, great space opera, one of the best villains in comics, fascinating aliens, exotic civilisations, and the delightful Professor Peabody. What more can I say?
Biggles in comic format is never as well drawn or paced. I suppose there is the same sort of upstanding Englishman about him but it's not to my taste. Biggles is another one popular on the continent.

Beautifully drawn is an understatement! Most of those pages deserve framing and hanging. I have a big stack of early Eagle's (including the whole of the first year's worth) and I sometimes pull them out just to look at the Dare stuff. Wish I knew where my Hawk Books reprints went.

if you read digital comics, they're on Comixology pretty cheap. Incal, that is.

tony ingram wrote:but evidently we're all too lazy too learn any language other than English...

Speaking of which... I AM wanting to try to get back to reading French (took it in college, and could read some then) and I'd like to be able to find and read some good French comics. Anyone have any suggestions for either good books to try, or resources to use to learn to read them?