Was This Really a Golden Age?

Was This Really a Golden Age?

I have always been a fan of the Golen Age characters of DC Comics (and, indeed, of Golden Age characters in general) but much of my exposure to them has actually been their appearances in modern (ie post Silver Age) titles. I have a small collection of actual Golden Age books and, of course, quite a few reprints, but there are certain characters I've still never seen in their original Golden Age stories. One of them was the Crimson Avenger, until I discovered a GA Seven Soldiers of Victory reprint in an old issue of JLA...and was, frankly, repulsed by the artist's depiction of the Avenger's sidekick, Wing. I've never really thought about Wing, before: he was just kind of there whenever Roy Thomas or somebody used the Crimson Avenger, depicted as a kind of smaller version of the Avenger with his costume colours reversed. So it was rather a shock to see Wing in this 1940s tale depicted as a gangling, buck toothed caricature of a Japanese person, wearing flapping, oversized trunks clearly intended simply to make him look foolish, and speaking in a bizarre form of pidgin English. Comics in the forties used exaggerated racial stereotypes all the time, of course, to mock the enemy durig the war-but Wing was supposed to be the hero's sidekick, a heroic character in his own right. He's even behaving heroically, in some of the same panels in which the artist is quite deliberately making him look stupid! What was the point of this? Was this really what the American public found funny? Because it's rather soured my appreciation of these characters and the time they were created in. I don't think I'll ever be able to think of the Crimson Avenger or Wing again without seeing this grotesque strip in my head. And that's rather sad. 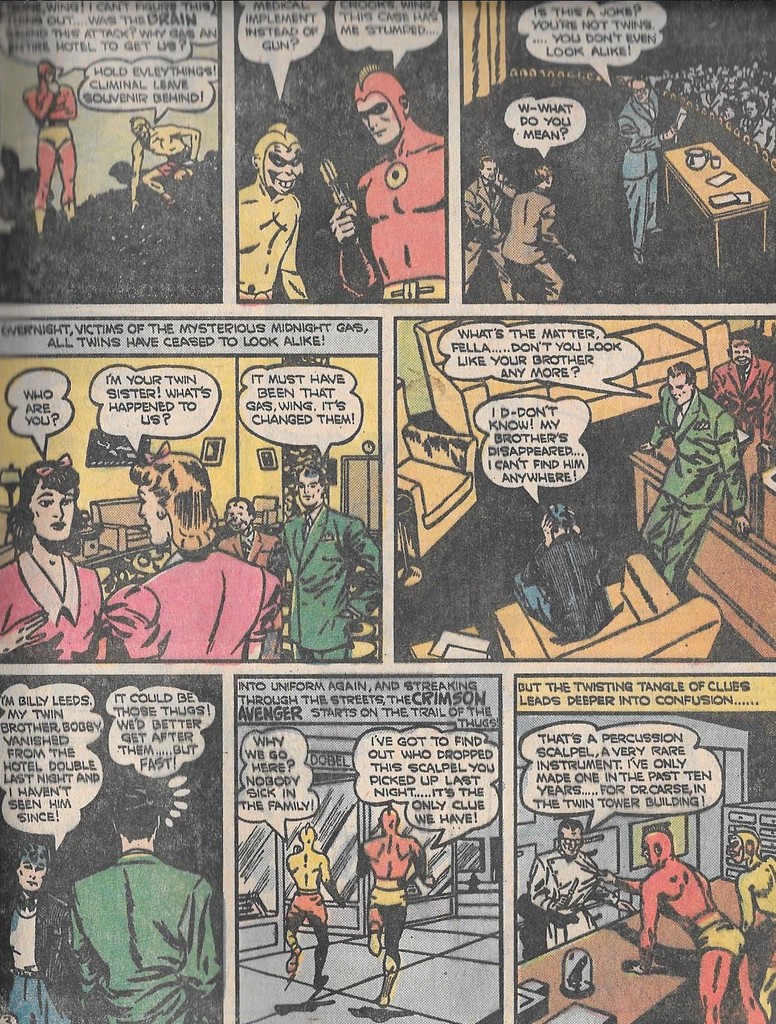 tony ingram wrote:I don't think I'll ever be able to think of the Crimson Avenger or Wing again without seeing this grotesque strip in my head. And that's rather sad.

Yes, and that's the sad thing. The past REALLY was ugly, in so many ways that it does sometimes mar our picture of it. Some great stuff did come out of that era, but in fairness a lot of it was terrible. And it seems that kind of racism was found funny. I have listened to a lot of old-time radio, and racism is pretty prevalent, and often used for comedic effect. Like how blacks were made to sound. Just awful.
Sorry that this makes you see those books this way.

It just never occurred to me that this particular character would have ben depicted in thisway. I guess now I know why he was never awarded the status of an 'official' Soldier of Victory back then, even though Speedy was...

I thought this was interesting:

Mbast1 wrote:I thought this was interesting:

I only found out fairly recently about the whole Dr. Droom being turned into an Asian bit, which was truly bizarre! Familiar with most of the others, though. Interestingly, the issue in which Wing dies has him do so off panel-we never actually see the character in all his embarrassing glory.