In case anybody is curious, here's what DC is suppose to be offering on Free Comic Book Day this year: 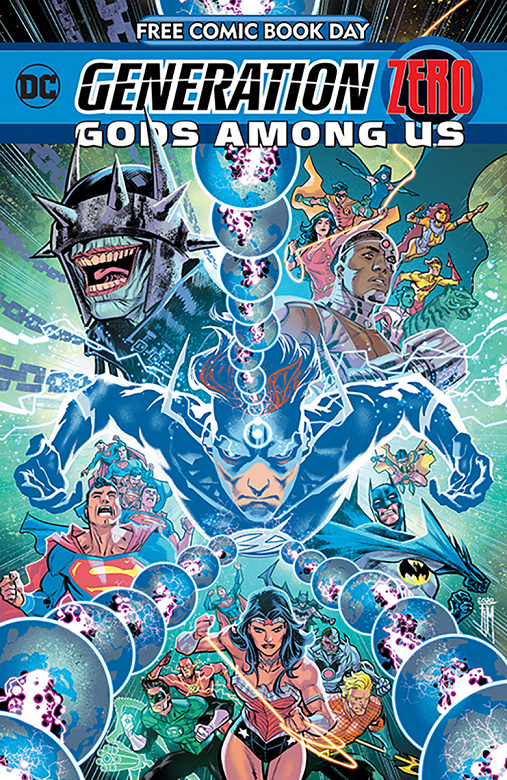 The march toward DC's future begins with Generation Zero: Gods Among Us! It all starts here, and everything counts. This issue features a version of the story "Flash Forward: Epilogue" that is expanded by 13 pages from its original publication in The Flash #750, with new material by the flash Forward team of writer Scott Lobdell and artist Brett Booth. In order to save his children and the multiverse itself, Wally West makes the ultimate sacrifice, taking his place in the Mobius Chair. Unbeknownst to him, the chair is packing a little extra power, having been imbued with the godlike powers of Dr. Manhattan! Now armed with infinite knowledge-and the powers of a god-Wally West can see the past, present and future of the DC Universe all at once...including what needs to be changed. This issue also includes a behind-the-scenes sneak peak at the upcoming Dark Nights: Death Metal!
Rating: Teen
In Shops on Free Comic Book Day!

MajorHoy wrote:In case anybody is curious, here's what DC is suppose to be offering on Free Comic Book Day

It looks somewhat interesting, but also it bothers me for co-opting Watchmen. That said, I've seen speculation that without Didio it might change. A lot.

MajorHoy wrote:In case anybody is curious, here's what DC is suppose to be offering on Free Comic Book Day

It looks somewhat interesting, but also it bothers me for co-opting Watchmen. That said, I've seen speculation that without Didio it might change. A lot.

Well, even without DiDio around, he only left a week ago, and it wasn't like it was an expected separation. In order to have a copies of the book ready for stores on May 2nd, that's basically about two months to work with. How many changes can they decide on and then actually make in order to still have a finished product at stores by then?
(Unless they just decide not to make the book available for FCBD?)

And, as I've mentioned in other posts, FCBD 2020 has been postponed due to coronavirus concerns.

You can read the rest of this here: https://www.freecomicbookday.com/Article/241387-Free-Comic-Book-Day-2020-Postponed

So what this could mean to the whole Generation-5 thing that DC was suppose to have going on this year, I guess we'll just have to wait and see.

As for Generation One, which was suppose to be available on May 27, there's a separate thread for that one, too: https://crikey.forumotion.com/t918-generation-one-age-of-mysteries

MajorHoy wrote: How many changes can they decide on and then actually make in order to still have a finished product at stores by then?

True, but I'm not sure. I guess there's no real way to know.

Well, two months after FCBD was postponed (cancelled?), the DC Comics Extended Forecast listing at comiclist.com still has Generation Zero - Gods Among Us (FCBD 2020) under "TBD" for when it's suppose to be released.

However, ign.com has now posted this:

Generation Zero: How Wally West Is the Key to Fixing DC's Broken Timeline
Wally West wants to remake the DCU as we know it.
Updated: 8 Jul 2020 8:51 pm / Posted: 8 Jul 2020 8:46 pm
By Jesse Schedeen
DC Comics has been making a concerted effort in 2020 to simplify the increasingly convoluted DC Universe timeline. A lot of that effort hinges on the Free Comic Book Day 2020 release Generation Zero, a follow-up to Scott Lobdell and Brett Booth's Flash Forward miniseries that reveals what happens when former Flash Wally West becomes the new Doctor Manhattan. Unfortunately, with FCBD being delayed due to coronavirus concerns, Generation Zero is only just now seeing the light of day, and not as a standalone FCBD release.
Instead, this story makes its debut as a bonus epilogue included in the Flash Forward trade paperback collection released on July 7. IGN has confirmed with DC that the standalone FCBD issue has been canceled and the Flash Forward TPB is the only place Generation Zero will be published.

This move certainly raises questions about the fate of DC's previously announced Generation miniseries and the mysterious 5G initiative the publisher has been alluding to over the past year. However, Generation Zero makes one thing clear - Wally West has a key part to play in remaking the DCU as we know it. Read on to find out what happens in this story and how Generation Zero connects the dots between key stories like Doomsday Clock and Dark Nights: Death Metal.

You can read the rest of that here:
https://www.ign.com/articles/generation-zero-how-wally-west-is-the-key-to-fixing-dcs-broken-timeline