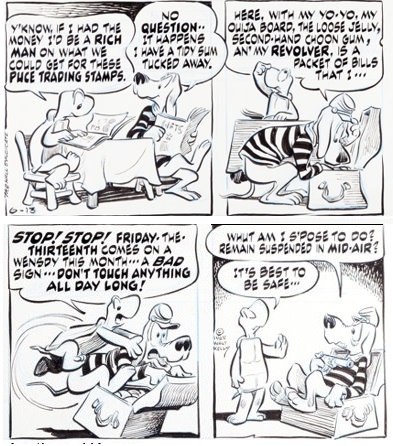 Walt Kelly was a real genius

, it's curious to think that when I was younger....I came to read the "modern" version of Pogo by Doyle and Sternecky published in italian magazine "Linus" (still published today, after more than 50 years since its beginnings, btw) who published the Peanuts and the best of American strips, like Calvin and Hobbes, Doonesbury, Mutts, etc. and I use to like it, it was fun; of course years later I discovered the original version of Pogo and it was really great!

Barry_Allen wrote:of course years later I discovered the original version of Pogo and it was really great!

I kinda went at it the same way, read the revival not knowing, and then found the original. I love that comic! I have bought a few revival strips on Ebay over the last few months, since I couldn't find it reprinted anywhere. I still am buying books of the original sometimes.