Frighteningly (for those of us old enough to have bought it) Marvel's first ever maxi-series, Marvel Super-Heroes Secret Wars, is thirty years old this year! It wasn't, as is sometimes claimed, the first big team-up series they ever published (that was Marvel Super-Heroes Contest of Champions, a three issue series from 1982) but it was certainly the biggest, and it set the pattern for a seemingly endless series of 'event' titles in the years to follow, most notably rival DC's now legendary Crisis on Infinite Earths the following year. Secret Wars also spawned a sequel, predictably titled Secret Wars II, and a long running Marvel UK reprint series (example below). It gave us Spider-Man's black costume, took the Thing out of the Fantastic Four, and introduced a new Spider Woman to the Marvel Universe. But mainly, it was just a lot of fun! And it certainly helped to sell the line of Secret Wars action figures, which was basically its sole reason for existing in the first place.

I still remember my excitement when I first read it, and I think I'll be celebrating its anniversary by reading it again (though it does make me feel rather ancient). Anyone else a fan? 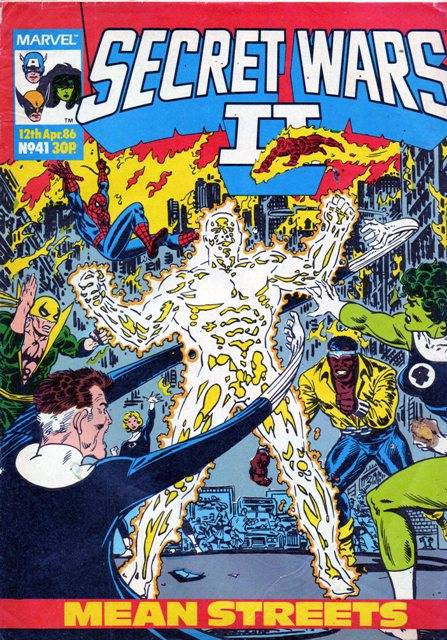 There has long been an argument (some of it by writers who worked at both companies) that Secret Wars was put out in a hurry because of COIE, not the other way around. No idea what is true, whether SW was already in progress and hurried along, if it was simply started AND done first, or what, but it's somewhat interesting.

It's certainly possible, since DC were clearly setting Crisis up at least a year in advance and probably quite a lot longer. Though Marvel had already done Contest of Champions and may simply have wanted to see if they could reuse the basic idea and spin it out for a year as an advert for the toy line.

tony ingram wrote:It's certainly possible, since DC were clearly setting Crisis up at least a year in advance and probably quite a lot longer. Though Marvel had already done Contest of Champions and may simply have wanted to see if they could reuse the basic idea and spin it out for a year as an advert for the toy line.

I'd also been suspicious of that being the case since CoIE was more substantial in how it affected the DC Universe, while Secret Wars (which, admittedly, I didn't read) seemed more like fluff with minimum impact (besides maybe some costume changes).

NOTE: Another reason for not reading Secret Wars: I had recently graduated college, money was tight, and I had been losing interest in comic books. But when CoIE came out, I read about it in mainstream media, and I had a full-time job at a bookstore with a comic book spinner rack, so I could check out an issue during my lunch break before fully committing to it.

Well, admittedly secret Wars didn't turn the Marvel Universe on its head like COIE did the DCU, but it did have an impact on Spidey, the FF and the X-Men. It also led indirectly to the formation of the West Coast Avengers, and, of course, led to Secret Wars II, which had far more of an impact on the ongoing books.